Call the fire brigade – and then temp-rite! 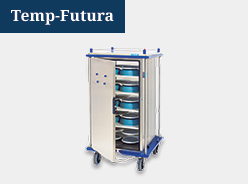 In the early morning hours of 07.04.2010, a fire broke out in Eschwege District Hospital. According to the police report, the fire started in the hospital kitchen.

The alarm was raised at 1:45 a.m. Smoke was billowing out of the hospital kitchen, which was well and truly ablaze. The fire had been caused by a technical defect. More than 250 firemen were called to the scene, and they managed to extinguish the blaze in less than an hour. No one was injured, but the material damage was enormous, and it was clear that patients’ meals would not be coming out of the kitchen for quite some time.

Some way had to be found of providing around 300 portioned meals – and quickly. The town hospital in Witzenhausen, also part of the Werra Meißner GmbH Health Services Group, was asked to help with the production of these meals, and the catering staff based in Eschwege went to work in Witzenhausen until their own kitchen was operational again. That this arrangement worked so well was a logistical triumph, for the kitchen in Witzenhausen had been set up to produce just 150 meals a day. 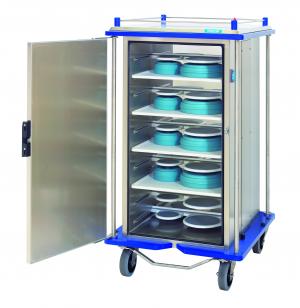 The meal-distribution trolleys and auxiliary equipment used in Eschwege District Hospital were burnt in the fire, but the meals prepared in Witzenhausen had, of course, to be distributed in Eschwege. Within just 10 days of having been awarded the contract, temp-rite served up a comprehensive solution involving the provision of a fleet of 17 Temp-Futura carts complete with all the requisite dishware and system equipment. In this time, the necessary logistical arrangements were set in place, and staff shown how to operate the carts and equipment.

Just a few days after the blaze, the Temp-Futura system was fully functional, and hot meals were being brought by road from Witzenhausen to Eschwege. Nursing staff and patients alike were pleased to be once again receiving hot, appetizing, well-presented meals.

While the renovation work proceeded, three sets of meals per day were delivered from Witzenhausen, which is some 30 km from Eschwege. In the meantime, the fire-damaged kitchen is back in operation. The decision-makers in Eschwege were so impressed by the all-round performance of the Temp-Futura carts that they are now a permanent part of the hospital’s meal-distribution system.

Further information is available from:

Our product advisor will help you find the right solution for your meal-distribution needs. 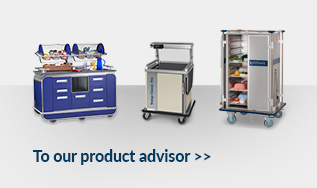